The 49th Grandmaster of 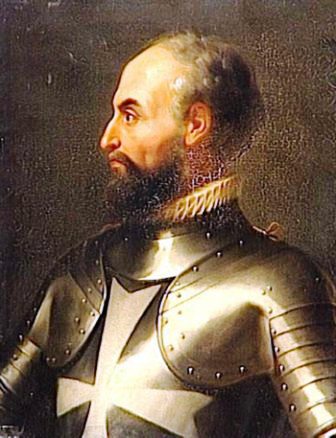 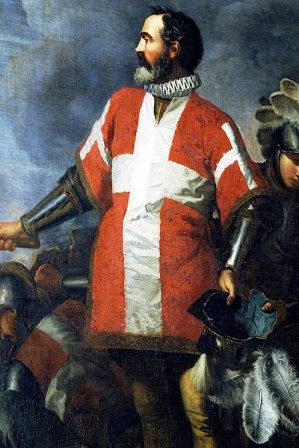 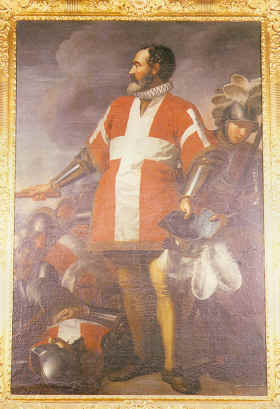 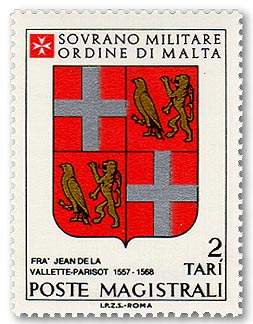 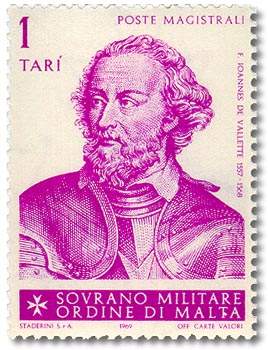 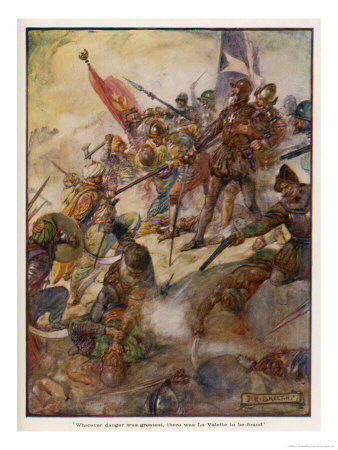 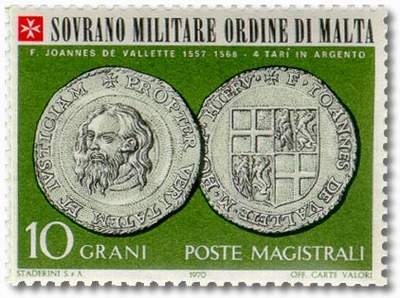 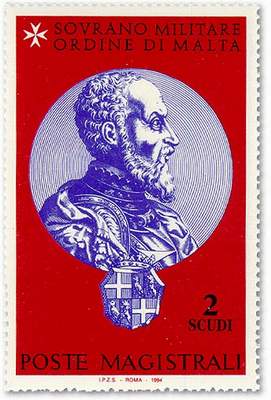 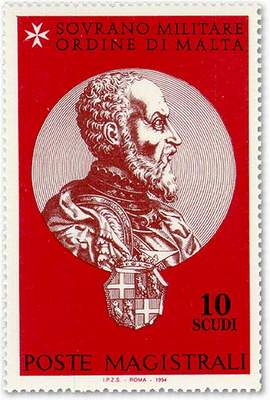 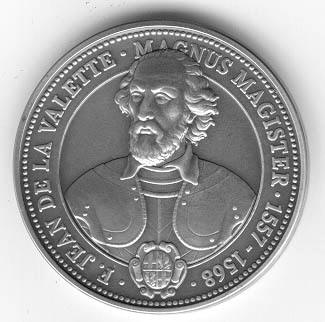 Jean Parisot de la Vallette(1557-1568) Jean Parisot de la Vallette, a Knight of the "Langue" of Provence, was proclaimed Grandmaster on 21st August 1557. La Vallette, however, had other more threatening problems to attend to. Tripoli was one of these: It had been reconquered by the Turks and was governed by the Turkish General, Dragut. On 18th May 1565 some 138 galleys under the command of Piali' Pasha and carrying a landing force of 40,000 men commanded by Mustapha Pasha appeared off Malta's coasts and started the Great Siege of 1565. Almost four months later, on 6th September, the defeated Turkish armada left these shores. The heroic Grandmaster died on 21st August 1568. He was buried in the church of Our Lady of Victories (where the foundation stone of Valletta (Malta's capital city) was laid in 1566 by La Vallette himself).

Jean Parisot De La Valette was the rarest of human beings, a completely single minded man. Born in 1494,he had joined the Order of St. John of Jerusalem when he was 20. He came from a noble and ancient Provencal family, descended from the first hereditary Counts of Toulouse, and could count among his ancestors Knights who had fought in the Crusades with St. Louis. It was a family which had already given several knights to the Order, but La Valette was more dedicated to his vows tham most of his ancestors. He never revisited his family estates, or returned to his native country. From the day he joined the Order, he never left the Convent except on duties.

As the Abbe de Brantome described him, "He was a very handsome man, tall, calm and unemotional, speaking several languages fluently-Italian, Spanish, Greek Arabic and Turkish". The last two languages he had learned when, suffering a fate not uncommon in those days, he had been captured and made a Turkish galley-slave, It was in action against the corsair Abd-ur-Rahman Kust Aly in 1541 that Valette was badly wounded and lost his ship, the galley San Giovanni. For a year he lived and survived in this terrible world of the galley slave. Only an exchange of prisoners between the Order and the corsairs of the Barbary coast secured his release.

Forty-eighth Grand Master of the Order of the Knights of St. John of Jerusalem; b. in 1494; d. in Malta, 21 Aug., 1568. He came from an old family of Southern France, several members of which had been capitouls (chief magistrates) in Toulouse. When still young he entered the Order of St. John as a knight of the Language of Provence. After the taking of Rhodes by the Sultan Soliman (1522), the order had, in 1530, settled in Malta which, with the city of Tripoli, the emperor Charles V had made over to them in full sovereignty. Here the knights devoted themselves to fighting the corsairs of Barbary, who were upheld by the Turkish Sultan. During this struggle La Valette made his first campaign, and soon rose to the highest ranks in the order. In 1537 he was appointed commander and governor of Tripoli. In that city, exposed to the attacks of the famousDragut, chief of all the corsairs of Africa, La Valette displayed his power of organization, re-establishing discipline among the Christian and Moorish troops, driving useless persons out of the town, and punishing blasphemers. He was no longer Tripoli when it was taken by Dragut in 1556.

La Valette was unanimously chosen (18 Aug., 1557) to succeed Claude de la Sangle as grand master. He re-established his authority over the provinces of Germany and of Venice, which had refused to pay the taxes levied by general chapters, but was unable to secure from the Council of Trent a confirmation of the order's privileges, and the restitution of commanderies usurped by Protestants. Lastly, he ardently devoted himself to fighting the Moslems. In 1560 he formed an alliance with Juan de la Cerda, Admiral of Philip II, to recover Tripoli, but the Spanish squadron wasted time in the useless conquest of the island of Jorba. The Moors of Barbary, commanded by Piale and Dragut, destroyed 22 warships of the Christians, and 4,000 Christians were killed or died of disease. Thanks to La Valette's intrepidity, the galleys of the order were able to save several Christian ships and to capture many corsairs. At his own private expense La Valette had two galleys built and the wealthier commanders followed his example. The vessels of the Order were commanded by experienced navigators, like Romegas, who knew all the ports and even the smallest bays of the Mediterranean.

This naval strength soon made itself feared by the Moors of Barbary and even by the Turks. The Knights of Malta having aided Garcia of Toledo to take possession of Valez de la Gomera (southeast of the present Spanish military station of Peñon-de-Valez in the Rif), the alarmed Moors appealed to Constantinople. Before long the Maltese squadron gained a bloody victory between the islands of Zante and Cephalonia, and captured a Turkish galleon manned by 200 janizaries and laden with precious merchandise; and within five years they had taken 50 Turkish vessels. The Sultan Soliman, exasperated, ordered all his available vessels to assemble before Malta, where Dragut and the corsairs were incited to join them. Spies were sent to examine the fortifications. Don Marcia de Toledo, Viceroy of Sicily, having obtained secret information of all this, warned La Valette and endeavoured to induce Philip II to assist in the defence of Malta. La Valette summoned all the knights of Christendom, raised 2000 men in Italy, and obtained from Don Garcia two companies of Spanish troops. The inhabitants of Malta were organized as a militia, every priory sent money, and 600 knights from all the provinces of the order hastened to the rescue. La Valette displayed extraordinary activity, planning fortifications, helping the diggers with his own hands, inspecting magazines, and attending to the smallest details. He told the assembled knights that they had now entered upon a struggle between the Gospel and the Koran. After receiving Holy Communion, all vowed to shed their blood in defence of the Faith. But the Order of Malta was poorly supported in this crisis by the Christian princes. The King of Spain alone promised assistance, which, however, was not ready when the Turkish fleet, commanded by Mustapha, appeared before Malta on 18 May 1565. It consisted of 159 warships manned by 30,000 janizaries or spahis, and a large number of vessels were employed to carry the siege train. The defenders of Malta were 700 knights, with 8500 mercenaries and enrolled citizens and peasants.
Mustapha attacked the fort of St. Elmo, and Dragut joined him with 13 galleys. In spite of the Maltese artillery, in spite of the heroism of the besieged, the Turks succeeded in taking that fort on 23 June, after an assault lasting seven hours. Thousands of Turks and the famous Dragut died in the encounter. Mustapha, exasperated by the resistance, ordered the hearts of the wounded knights to be torn out of their bodies. La Valette, on his side, had all the Turkish prisoners beheaded and forbade any more prisoners to be taken. From that time the town proper and all the forts were surrounded. On 18 August the Turks tried to enter by a breach in the wall, but were driven back after six hours' fighting. La Valette himself, pike in hand, charged them, leading his knights. On 23 August another assault resulted in the taking of the Castille bastion, but La Valette spent that night constructing new defences. At last, on 7 September, the relieving fleet of Don Garcia de Toledo arrived. After four months of fighting, Mustapha, disheartened, raised the siege; he had lost more than 20,000 men, and abandoned his heavy artillery. Malta was saved, and the heroism of La Valette at last awakened Europe from its torpor. All the princes sent their congratulations; the pope offered him a cardinal's hat, which he refused; 300 noblemen, among them Brantôme came and offered him their services. To protect the island from any future attack, the grand master had another town built upon the site of FortSt. Elmo (1566). This was the city of Valette (or Valletta) which made Malta impregnable, and which was still sufficiently strong in 1798 to check Bonaparte. The last years of Valette's life were saddened by conflicts with the pope, but at the time of his death, in his seventy-fourth year, he was busy preparing "for some great deed of war and of conquest"

Jean Parisot de la Valette died peacefully in 1568 before the completion of the city. His tomb (in the form of a sarcophagus) can be found in the Crypt of the St John's Co-Cathedral, situated within the walls of Valletta. The inscription on his tomb, which was composed by his Latin Secretary, Sir Oliver Starkey, the last Knight of the English Langue at the time of the Great Siege, states in Latin:

Here lies La Valette.
Worthy of eternal honour,
He who was once the scourge of Africa and Asia,
And the shield of Europe,
Whence he expelled the barbarians by his Holy Arms,
Is the first to be buried in this beloved city,
Whose founder he was