The 60th Grandmaster of 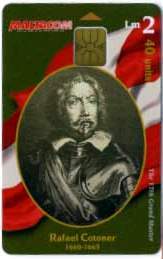 For the next twenty years the Cotoner brothers dominated the Scene. Grand Master Raphael Cotoner (1660-63) was a prudent and a religious man. He commissioned the celebrated Mattia Preti to paint the vault of St. John's but he was not destined to see the magnificent pictures of this genius who in 13 years turned the conventual church into a gem of art. Nicholas Cotoner (1663-80) was quite a different character. He was stubborn, impetuous and quick-tempered. He took great interest not only in St John's but also improved the Sacra Infermeria and built vast fortifications which still bear his name. During the reign of the Coroner brothers, Valletta became a gay city, a centre of continuous feasting, and its Carnival outlived those of Rome and Venice. They were both great builders and their escutcheon is over the facades of most palaces, churches and fortifications in Valletta and other parts of the island. However, St John remains their greatest contribution which they both loved and beautified. Theirs was a period of prosperity in the islands but their mania for building and extravagant tastes was a drain on the Treasury.