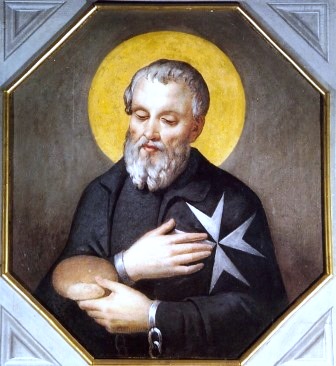 Founder of the Order of Malta

It is not certain whether Gerard came from present-day Italy or France. He went to Jerusalem and there, towards the end of the eleventh century, he established a hospice for pilgrims and the sick next to the Church of St. John. To maintain this work he founded a religious community, which he governed in accordance with the Rule of St. Augustine. On 15 February 1113, Pope Paschal II solemnly approved the new Order, which had been established even before the first Crusaders went to Palestine to recover the Holy Sepulchre. The Pope's Letters Apostolic, Piae postulatio voluntatis, were addressed to 'Gerard, Founder and Warden of the hospice at Jerusalem and to his lawful successors.' Gerard died at Jerusalem in 1120. This is also the day on which, in 1993, the Grandmaster decreed the Restoration of the Grand Priory of England.

O God, who exalted blessed Gérard because of his care for the poor and the sick, and through him founded in Jerusalem the Order of St. John the Baptist, give us the grace of seeing, as he did, the image of your Son in our brothers and sisters. We ask this through our Lord Jesus Christ your Son, who lives and reigns with you and the Holy Spirit One God, for ever and ever. Amen.

(From: The Missal with readings of the Order of St. John of Jerusalem of Rhodes, & of Malta, London 1997)

Here we must write a new chapter of the Golden Legend. May we be able to give to this tale the charm and flavour of Voragine!

To begin from the very inception of the Order, we must salute the founder, the Blessed Gerard.

His origins are uncertain and in dispute by historians; his patronymic is not even known with certainty. Did Gherard, or Girard, or Geraud, or Gerald, or Gerard Tenque or Tunc belong to the illustrious family of Saint-Didier or was he a simple artisan? Was he hermit of Saint Augustine or an oblate of Saint Mary Latin? Was he born at Martigues in Provence or at Sasso di Scalo, near Amalfi?

Whatever may be the truth, it was at Manosque, without any doubt whatever, that his relics remained from 1283 -  that is, from the capture of Acre by the Mohammedans and the rallying of the Hospitallers on Cyprus - until the French Revolution destroyed them. Yet, a humerus and a vertebra of the holy body were saved and kept in the church of Martigues. After the "separation" and inventories, it has been possible to see these remains in a closet of that city's town hall. That fact would lead us to believe that the Blessed Gerard is from Provence. Cut can he be from Amalfi? Who can say?

Before the First Crusade, he was already in charge of the Hospital of Jerusalem then served, at least spiritually by Benedictine monks - a fact which might lead us to think that he was indeed an oblate.

When the crusaders besieged the Holy City, Gerard used his influence to facilitate their victory. Legend even insists that he threw food to them over the walls and that, denounced, he was led before the Mohammedan governor and commanded to show what was in the bag he carried; only stones were found in it. But his rapacious adversaries suspected that he had a treasure hidden in his Hospital. He was imprisoned, questioned, and tortured. It was there that the crusaders delivered him from his chains, after they had taken the city's last defences by storm. Gerard's toes and fingers had been atrociously burned.

Free, and deep in the favour of King Godefroy de Bouillon because of the services rendered during the siege, Gerard, having come back to the Hospital, re-organized it and accepted all the sick and wounded Christians brought to him. He took care of them diligently and charitably. Certain patients of his, touched by  his example, stayed with him as male nurses; others returned to their countries and gave him liberal donations.

During these events, Gerard separated from the Benedictines, who could not reconcile their rule with the new state of things: the development of the Hospital and the influx of lay vocations. Resigning themselves, we hope, the good monks built a church not far from Saint John. Gerard added to the Hospital a house in which to lodge his brothers. He adopted for them the Rule of Saint Augustine, which was flexible enough to be adapted to their special mission. Two popes addressed Bulls to him, encouraging his enterprise and blessing it.

We find in him the typical example of those active mystics who are not men with great projects and plans laid far in advance, but who can meet the challenges of the moment and at times foresee them. An event as abnormal in its consequences as a crusade does not disturb Gerard. He adjusts himself to it as best he can and at his own risk, according to his conscience; then he returns to his work, moulding it to the new necessities. Does it require a painful decision, a separation, a complete re-organization? The act is accomplished and history does not state whether it was without clash and pain. But the basic aim is reached: the relief of bodies and well-being of souls; the goal is attained thanks to the new group of those religious, of a special type, unknown up to that time and answering in an original and military way the appeal of divine charity. That creation is a perfecting and not a destruction of the work already existing before him. It denotes the talented flexibility of Gerard's spirit as shell as his great humility.

All men of the Middle Ages venerated his virtues, and gave him the title of Blessed, which in the language of that period was equivalent to canonization. That is how he has always been considered among the knights of Saint John of Jerusalem, his children. That is how we pray to him and invoke him, in conformity with the decisions of Benedict XIV.

(From: Ducaud-Bourget, Msgr. François: The Spiritual Heritage of The Sovereign Military Order of Malta, Vatican 1958)

Back to the SMOM Page of the